If we follow the rough, narrow by lanes of  National Highway 17 of Uttara Kannada district, the rough road never seems to end. Amongst the furrows beside the road where areca nut, coconut trees and plantains grow, we can spot earthen houses with thatched roof. The front yards are daubed clean with cow dung, a sacred house for Tulasi, a ‘jagali’ to sit down while having the ritual betel leaves and arecanuts, a fine chicken coop made of packed earth on arecanut poles, hens clucking around in the yard…this is Haalakki Koppa. 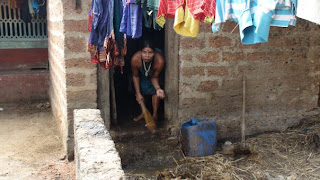 An old man pounding betel leaves and arecanuts, the woman peeping from the cowshed with lots of black, yellow and blue beaded necklaces, when you go near them and speak an emanating feeling of warmth only felt in the family, their natural hospitality - asking their guests to sit on a mattress..these are the Haalakki people.
Although only a few kilometers away from the National Highway, the  Haalakki people have remained unique, aloof from the civilized world. 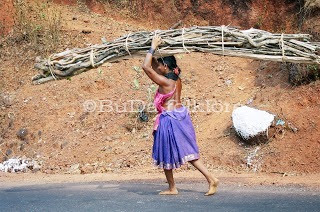 Haalakki Vokkaligas can be seen on both sides of National Highway 17 that passes through Karwar, Ankola, Kumata, Gokarna and Honnavar talluqs of Uttara Kannada district and the parts of land touching the waters of Arabian sea.
There are many remnants of ancient society indicating that there was independent, self-rule. The underlying system of their society is very different. The whole population of the Haalakki tribe has been divided into 7 regions. The religious rituals are bound by these regions. The seven regions are Chandaavara, Gokarna, Kadavaada, Ankola, Nushi Kote, Kumbaara Gadde and Haritte Seemey.
A group of Haalakki huts is called ‘Koppa’. Many Koppas together form a seemey. Each Koppa has a Gowda and a Budavantha and a Kolkaara to assist him. Leader of the Seemey is called Arasu or Gowda. The power is hereditary. If  the judgement pronounced by the Gowda of Koppa is contested, leader of Seemey makes the judgement. 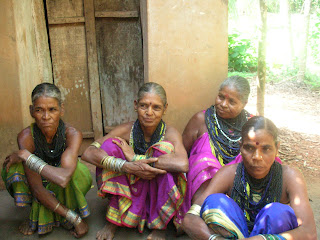 Haalakki women have maintained their own culture, although in contact with the main civilization. They continue to astonish cultural thinkers amidst all the modernity.
Their backs are dark coloured, always exposed to the sun, their shiny black hair is well oiled and combed, ‘abbalige’ or ‘muthumallige’ flowers adorn their heads, black beaded necklaces are worn from neck to shoulder, a german silver ‘Halkadi’ or  ‘bandhi’ made of thick metal plating, 4-5 worn out brass shoulderbands shiny and golden, glass bangles in the left hand and bangles made of german silver or some cheap metal on the right hand, (It is unknown as to why they believe glass bangles should not be worn on the hand that gives food to their husband.), saree worn in a special way without a blouse.. all these are the specialties of Haalakki women.

Regional differences in the same tribe

When Haalakki women sing the stories of Ramayana and Mahabharatha, a new world opens up. They call Mahabharatha as Pandavara kami and Ramayana as Seethekami. According to their songs, it was not Rama but Lakshmana who won Seetha!! Lakshmana did not break any bough to win Seetha. Instead, he kills a crow (kaa mandala kaage) that hindered king Janaka’s meditation. These songs of tribal Ramayana contain wonderful imagery like that of  a cobweb in the throat of Lakshmana who does not touch food or water for his elder brother. In Seethe kami, Seetha’s personality is more important than Rama. This is much longer than Pandavara Kami and has to be sung the whole night.. but people who can sing Kamis elaborately are not available.Sometimes i feel Ramayana and Mahabharatha were born amongst such people. The stories are so original and you began to think when Rama become godly figure .. 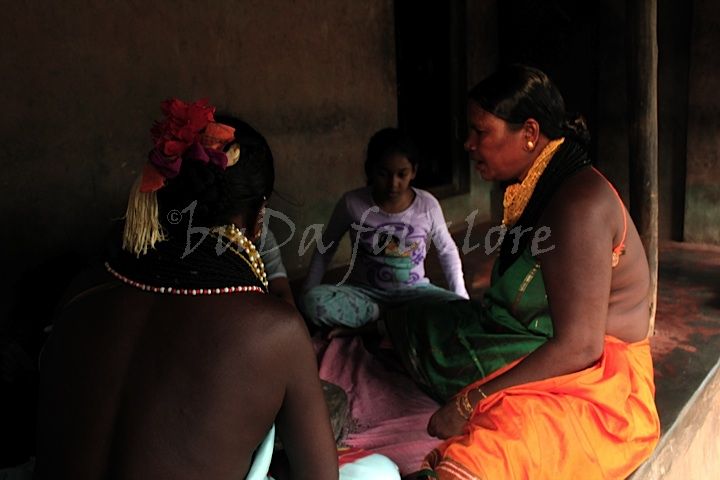 Sukri ,Nugli ,Padmavathi who are associated with buDa folklore since many years  as resource persons.They can sing for days and nights together. These women are not just singers, they know many herbal medicines.If you go for a walk with Sukrajji there is a story to tell for each and every plant you meet on the way .Each plant will be identified .Padmavathi is a very spontaneous singer and narrates the stories  so well .

Name and origin of Haalakki Vokkaligas:

There are no concrete evidences regarding the origins of Haalakki Vokkaligas. However, Dr. R.N. Nayak, who has worked extensively regarding the folk culture of Uttara Kannada gives the following reasons as to why it can be assumed they originate from Andhra:
1.They are the staunch followers of Thirupathi Thimmappa.
2. Their songs often mention eastern sea.
3. Telugu word ‘haalika’ is very much similar to Halakki.
4. The pronunciation differences in their language such as Na-na, La-la, sa-cha are similar to that inTelugu.
The language of Halakki people is Achchagannada. They are the devotees of Thirupathi Thimmappa. Every house compulsorily has a Tulasimane. It is a curious fact as to how these Halakkis, inhabitants of west coast became devotees of eastern Thirupathi Thimmappa. Hi Chi Boralingaiah suggests that the Halakki Vokkaligas, Gondas, Gamokkalus and Kare Vokkaligas who earlier used to worship gods such as Byate Beera, Masthi and Chowdi  must have come under the influence of Vaishanavism during a special time period.
When their traditional rituals and devotional practices are observed, matriarchal culture stands out. Forest plants, animals, hills and brooks are symbols of their clans, which suggests a matriarchal society and that they originated from the forests. Now, they have forgotten the names of their ancient clans.(§½UÀ¼À?)
Folk scholar Dr. N.R. Nayak says that this group entered Uttara Kannada from Goa’s direction, stayed in Baithkola of Karavara in the beginning. Halakki people recognize a hill of this region as their tribe’s village.

In the beginning, Halakki Vokkaligas stayed like Thodas of Nilagiri near the foothills and depended on Kumbri system of agriculture. When British government banned Kumbri agriculture, they gradually migrated to riverbanks, seashores, flatlands and started working for landlords. Many of them, even today, work on Geni basis. Some own pieces of land after ‘tiller is the owner’ legislation was passed. After hunting was declared illegal, they are dependant upon agriculture for their livelihood.
They have a middle position between forest and the city. Their symbolic hunt once a year and their prayer-appeal to Byate Beera suggests their strong ancient connection with the forest and their cheerful harvesting festival suggests that they gradually turned to agriculture.

Some 50 years ago, during the full moon annual harvesting, whole village used to participate in preparing the harvest gear called Suggithurayi and  Kunchas. The whole village used to enjoy during the festival as a community. Even the village head Gowda used to touch the feet of Suggi Makkalu – the harvest dancers. The whole harvest dancing team – Suggi mela – used to consider themselves as one family. A remnant of tribal life can be seen here.

There is a need focus on this and study the idea of a strong social system behind tribal rituals in depth.Halakkis, who were originally hunters, used the skin of monitor lizard for their unique drum ‘Gumte’, an instrument used during harvesting festival dance. As hunting is illegal now, many new instruments have come to existence.


The lack of peacock feathers used in Kunchas, bendu – a thing used in thurayis, and monitor lizard skin for drums has played an important part in bringing about a change in the costumes of Suggi Kunitha – harvest dancing.

As to how they got their name Halakki is yet to be decided. According to one of their legends –
Shiva was ploughing the field. Once, Parvathi tripped and fell down while she was carrying food for Shiva. Rice and milk fell on the mud. She made one male and one female doll out of that mud and returned home. Shiva left ploughing and was coming back searching for Parvathi. He saw the dolls. When he touched them, they came to life. The dolls said, we came to life because you touched us, now what we should do for a living. Shiva said you were born when I was ploughing the field so you continue my work. Therefore, agriculture became the main work for Halakkis. As they were born out of a mixture of rice and milk, they got the name Halakki.
According to the Mumbai Gazeteer, they got the name Halakki because they grew rice as white as milk.
There are many stories available in the harvest songs (suggi haadu) and Gumate padas regarding their name and birth.

The upper part of Karnataka ghats existed before Konkan belt. Parashurama, who owned the land that came to existence due to sea corrosion, gave this ancient Haiga country to Nagara(Naga) and Muchchi tribes to rule. Later, this was taken by Mogeras and Holeyas.(untouchables)
Hence, there were only non-brahmins such as holeyas and bedas living..later Brahmins, Budhdhist and Jains came and settled in this land. There are evidences and folk legends to claim this fact.
As Uttara Kannada district is a part of land that was formed as a result of sea corrosion, it supports the fact that Haalakkis came and settled from some other place.

In the Suggi songs and Gumte padas of Halakkis, according to Madevaraya’s song, “There was a pariah(holati) woman ruling the seashore lands. This was the reason why the land obtained by Madevaraya was not strong. Hence, Madevaraya killed the pariah woman and obtained a caste each from her flesh/body parts”.(Dr.N.R.Nayak, 1989. p.54) Further, according to this song, Madevaraya forgot to create male and female of Haalakki tribe. When they appealed to him regarding their woes, Madevaraya, who was eating milk and rice during that time, made a male and female doll out of it and gave them life. He said there was no need for them to observe ‘madi-mailige’(cleanliness rituals) as they were born from milk and rice. According to this legend, all other tribes originate from the pariah woman whereas the origin of Halakkis is portrayed to be different. However, strong evidence regarding the origins of Halakkis is yet to be obtained.