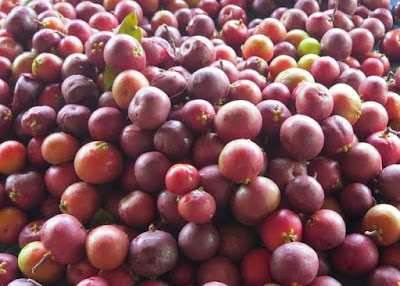 As an attempt to keep my feet off my home city of Delhi and close to the nature, I found myself Wooffing in the lush hues of green and brown and yellow in the Angadibail Forest of Uttar Kannada. With birds chirping through a silence so subtle, a local lady helped me to the Angadibail home of Buda Folklore where I was to volunteer for their upcoming Kokum Harvest Festival. And Kokum did I harvest, climbing those slender trees like my pre-evolution monkeys. Big red fruits, some sweet, some sour all from trees to baskets to the processing units that were men and ladies and kids; separating the peel, juicing the pulp, collecting the seeds, all in all where nothing goes to waste.


“Come with an open mind and you shall find the learning you are looking for,” said Dr. Savita Uday or Savitakki, as I like to call her, when I expressed my desire to work at her farm a few weeks into April. And learning did I receive, learning packed with laughter; with stories and skills from the native Halakki and Siddi tribes; with dance and healthy food; good bamboo music to suit every taste and butterflies flying in my face.

The first morning of the festival was Savitakki waking us girls with her musical “hey girls, we need some help”. The previous night, Harita and I had retired to one of the Machans, where this wonderful platform under a Fig tree became our bed under the starry forest night. With this began a day of the festival days where I was entrusted with the morning herbal tea for the Buda community while the new friends Harita and Atmeeya sang along taking turns sweeping and mopping.
Kokum, which until now was only an appetizing squash for me, turns out, is an all rounder fruit finding its uses in medicines and cosmetics too. While on one hand we got to relish the refreshing cardamom flavored Kokum Sherbat and spicy Kokum rassam, on the other we had our lovely Gopi akka (a Siddi) let us grind boiled Kokum seeds from the year before. The de-husked and ground seeds were later boiled to make kokum butter, a very important ingredient in Atmeeya’s organic soaps. And these soaps I can swear by them to trash all my Nivea and Dove products, for they moisturize as they bathe, and their scents are meant to waft off you throughout the day.

Riding through the bumpy forest on a Bolero Pickup we’d go to harvest a lot of the day. With Eeshwaranna, the arms of Buda, climbing the topmost branches, it literally rained Kokums. But to Savitakki’s expectations, this year’s was a scant produce with Kokum barely ripening, growing to the size of green apples even. All thanks to the climate change.
The baskets filled with the fruit nevertheless had our hands full and separating the fruit parts where the good peels went into making fruit preserve and not so good to dry in the sun. The seeds were to be under the sun too till they became dry enough for butter making. So yeah, nothing went to waste, not even the stem heads for they too found their place in the soil under the banana trees.
While Kokum harvesting and processing marked the lengths of our days, the afternoons relaxed into lazy naps and board games that Advitee had hand stitched into beautiful cloth patterns. The evenings had Anvay and I walk to meet the neighbors and bring home another round of milk, sharing our set philosophies and debating over worldly politics on the way. We’d come back to find the Buda community engaged in making baskets out of tree vines, or crowns out of mango leaves.

One of these evenings, to my pleasure, turned out to be a Siddi dance lesson where Raghavendra and Mahabaleshwar anna sang and performed their native Konkani songs ‘Muiyan cha Kottaw’ and ‘Miya Gailo Mumbaik’. The Dholak that they played to set the beat right had us all dance our souls out with the wildest expressions brimming off our faces. Prabodha who turned out to be the best performer, rolling on the floor even, had Padmavati Akka laugh her heart out. And Padmavati Akka, what a brilliant storyteller she is!
A Halakki granny, Padmavati Akka in her blouse-less wraparound of a saree and yellow and black and white beads trailing around her neck, one night sat with her lantern lit face under the starlit sky. She took the stage which was to later become our bed, walking us through the stories of ‘Vakkal Gowda’ and ‘Devvad Kathe’. To the least knowledge of Kannada that I have, Padmavati akka’s expression and gestures became a resting reliance. Such a performer, I swear! I have never seen anyone enjoy their own act so much. She just couldn’t stop laughing while telling us Devvad Kathe, this funny fable about a son’s dance with the demons. While Harita’s translation helped us understand what was being told, a bigger thanks goes to the performance itself for it had no language barring the flow.

To relish the native flavors, we had homely meals of beaten red rice, new rassams every night and curry mixes and sabzis with a dessert of Kadabu or ragi barfis to top with. Thanks to Soumya akka for all her kitchen wonders of taste and aroma and Uday uncle for his score of pickles and chutneys. That Lemon and Chilly Pickle stood out to be my personal favorite.
Burping our guts to relive the tastes we edged towards the nights which had us race or call dibs on any of the two Machaans. Some would peacefully settle for the attic and Veranda or they’d settle for the platform under the sky. And under the sky did I sleep for most of the nights, sometimes confusing fireflies for shooting stars, on others fireflies for predator's eyes.
The diversity of cultures, energies and philosophies that the festival brought together wafted in the breeze of the Angdibail Forest through the day. While it taught me everything from the values of the beloved fruit to the lost art of basket weaving and all the dancing and singing that came with it, it incited in me an inclination towards working in a community. No meal can taste better than the one that is touched by the hands of all the people who are later going to eat it. Such solidarity and harmony seems lost in the home city with cellphones taking space on the dining tables and with one or two designated members of the family arranging the food for all. Here, with no connectivity with the outside world, a diverse lot of like minded people came together, and singing the best of Rafi and Kishore, cooked for one another. This for me was the best family I’ve ever been a part of.

The farmhouse of Angdibail – its comfortable attic and homely kitchen; the dining area with a view of the farm and ‘Moti Gudda’ in the distance; the pets, Beera and Bella; and the constant chimes of everything that decorated it – had through the week-long festival seen a worldly share of ideas and appetite. From experimenting with Kokum’s culinary abilities, to dancing with the Siddis; night walks in the forest and predicting rain, we all ecstatically edged towards the end of the festival. And soon, with the participants leaving, the days of the festival that had the forest echo with laughter and joy ascended to the music of the chirps and rustles of the forest, once again.
And so came the last night of the calm and it brought with it light drizzles which had all who remained running around to save the produce from the year’s harvest and processing. Marking a brilliant end to the bustle in the calm, the rain went away soon after. And soon after came the moon lurking out of the skies and it lulled the forest good night.

Please ask first before using any of the photos on this blog. I love sharing, but like to be asked first.